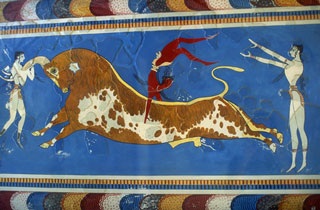 Knossos was the oldest city in Greece. It was located on the island of Crete and was the centre of the Minoan civilisation.

At the heart of the city was the Palace of Knossos. This vast building had over 1,000 rooms, some decorated with beautiful paintings of dolphins and bulls.

Legend has it that Knossos was also home to a man-eating bull, called the Minotaur, which roamed the palace labyrinth.