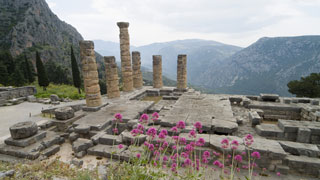 Delphi was one of the holiest places in ancient Greece. People travelled from all over the country to visit a famous priestess called the Pythia.

She was said to offer advice from Apollo, the god of sun. Before making her prophecies, the Pythia would go into a trance by breathing in vapours rising from a crack in the ground.

Delphi was also home to the Pythian Games. These were like the Olympic Games but included acting, painting and dancing events, as well as athletics.