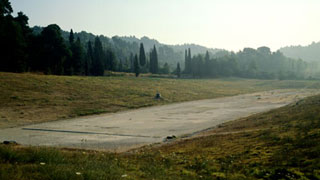 Olympia was home to the ancient Olympic Games.

Every 4 years, athletes came from all over Greece to compete in running, wrestling, boxing, jumping, throwing and horse racing.

The Olympic Games were also a religious festival dedicated to the god Zeus.

Visitors stared in wonder at the huge gold and ivory statue of him inside the Temple of Zeus. There was also the Great Altar of Zeus, where 100 oxen were sacrificed in his honour every year.