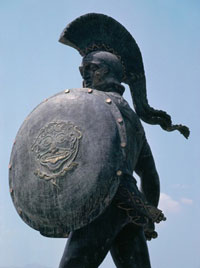 The Spartans were very serious soldiers and they spent their entire lives training for battle.

Boys left their families when they were seven years old to begin their 23 years of training to become a soldier. Only those who made it through this gruelling system were considered true Spartan citizens.

Sparta was ruled by two kings, who were supposed to be descendants of Heracles. One king might stay at home, while the other was away fighting battles. The most famous king of Sparta was Leonidas. He led 300 Spartans against the Persian army at the Battle of Thermopylae.