Let's learn about the Amish!

A conservative Christian faith group, the Amish live a simple lifestyle that is an expression of their religious beliefs. Amish people began migrating to North America from Europe in the early 1700s. It was estimated that at the beginning of the 21st century there were about 100,000 Amish living in North America. Most settlements were in Pennsylvania Ohio, and Indiana, with smaller numbers in at least 15 other states, as well as Ontario, Canada.

Amish people reject most aspects of modern life. They do not usually use telephones, electricity, radios, televisions, or automobiles. Horses and buggies provide transportation. Many Amish are excellent farmers who do not use power machinery. Other common occupations are carpentry and blacksmithing. Amish women are known for producing beautifully handcrafted quilts.

Children attend one-room schools in their communities. Their formal education goes only through the eighth grade. In 1972 the U.S. Supreme Court passed a law recognizing the right of Amish people to limit their education to the eighth grade. Amish boys and girls learn an occupation by helping their parents in the field, house, or workshop.

The Amish hold worship services on Sundays, but there are no church buildings. Instead, Amish people meet in each other’s homes. Each church group is independent; there is no central organization. Since the Amish do not actively seek new members, there are no missionary groups. An estimated 90 percent of members are descendants of other Amish people.

The Amish celebrate the traditional Christian holy days, such as Christmas and Easter. Only adults are baptized. The Amish follow the Ordnung, which is an unwritten but understood set of rules that regulates the Amish way of life. 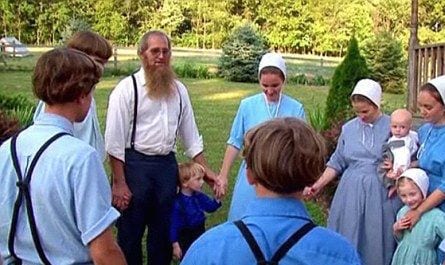 They can only go to school for 8 years and they only learn about maths, writing and reading. They can also learn history but just Amish history. The do not learn about other subjects that could make them escape to normal society.