THE BIG BANG AND THE SOLAR SYSTEM

Activity 0: Think about the Universe. Try to ennumerate the characteristics you all think it has, its components and how it probably works.

Activity 1: Watch the video about the Univers above. Then, and according to the video information, try to create a scale time map or a calendar of the universe. You can also find help by looking at the following picture:

Activity 2: Read the following text and try to underline and memorise the new words that names the celestial bodies in the Universe:

What Is The Solar System?

Our solar neighborhood is an exciting place. The Solar System is full of planets, moons, asteroids, comets, minor planets, and many other exciting objects. Learn about Io, the explosive moon that orbits the planet Jupiter, or explore the gigantic canyons and deserts on Mars. But... What is it?

The Solar System is made up of all the planets that orbit our Sun. In addition to planets, the Solar System also consists of moons, comets, asteroids, minor planets, and dust and gas.

Everything in the Solar System orbits or revolves around the Sun. The Sun contains around 98% of all the material in the Solar System. The larger an object is, the more gravity it has. Because the Sun is so large, its powerful gravity attracts all the other objects in the Solar System towards it. At the same time, these objects, which are moving very rapidly, try to fly away from the Sun, outward into the emptiness of outer space. The result of the planets trying to fly away, at the same time that the Sun is trying to pull them inward is that they become trapped half-way in between. Balanced between flying towards the Sun, and escaping into space, they spend eternity orbiting around their parent star.

Activity 3: Now watch the following video. Then, complete the song and sing it.

Mercury is the c______t (superlative) planet to the sun

Earth comes t_____d (ordinal) the only life that we know

Saturn has r_____s (noun) around the outside

Uranus is f_____y (adjective) ‘cause it spins on its side

Can you keep up?

We're gonna say all the planets from the first to the last. 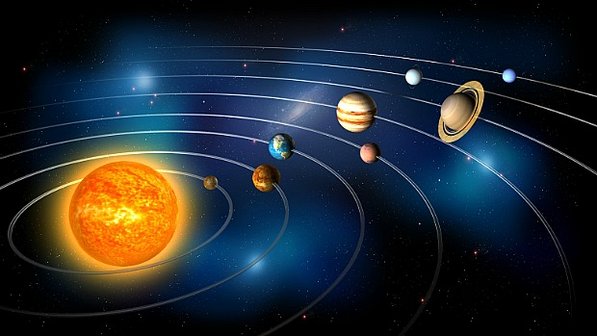 Activity 4: In pairs, play the JClic activities. The first one is an alphabet soup where you can find the name of the eight planets. The second activity consists of joining each planet with its name, according to the characteristics studied.

Get the JClic game here!

Warning: If you aren't at home, you'll need to install JClic software.

If the link doesn't work properly, you can also download the activities from this unit.

If the link doesn't work properly, you can also download the activities from this unit.

Homework activity: You students will have to write in your personal learning notebook the concepts learned during the lesson, as well as other things you believe are relevent or you are interested in. This notebook has also to include the new gramatical expression and words used during the session. Additionally, it will help you to create the glossary that will be asked as a final task at the end of the unit.

Optional activity: You can work in groups of four or five to create a poster of the Solar System celestial bodies and their position in respect of the sun. you can do research, repeat the activities or look at the photographies attached as many times as you need.