In this part of the unit we are going to talk about how to communicate safely through a shared and insecure channel like internet, where there are many bad guys, who might intercept  read and modify the messages, and even usurp the identity of other people with evil intent.

All these elements are meant to make safely the communications from a legal standpoint. This concept is also known as to provide LEGAL SECURITY to the Internet

In this activity you will learn how to use asymmetric encryption based on P.G.P. You will create a couple of public-private keys. You will exchange public keys with a classmate, and you will use your respective public keys to encrypt a secret message that only your classmate will be able to read.

This activity must be carried out between two students. So, choose a partner among your classmates.

Nowadays Internet is extremely insecure, and any information moving through the net may be intercepted by third parts. This includes confidential information as  personal data, bank account credentials, logins and passwords.

When it comes to transmit data through internet there are two big issues:

There are two types of encryption: symmetric and asymmetric.

It uses a single key that must be known by the sender and the receiver, both to encrypt and decrypt. Something encrypted with a given key A, can be decrypted only if the other part has the same key A.

Symmetric encryption is simpler and easier to implement but has a serious flaw: privacy depends on the secret of the key…. If it is sent through internet we can not ensure it won't be intercepted by others compromising the message privacy

Let's call A an B public and private keys

The private key will remain secret and safe because it will remain in the owner computer . Othewise, the public key can be sent through internet to whoever his owner needs to communicate with . It doesn't matter if it is intercepted by other persons as it'is going to be shown next:

To exchange encrypted information from user1 to user2

DON'T DO HIS PART

In this activity we are going to use the program Seahorse. This program provides a graphical  interface for  GNU Privacy Guard, most commonly known as GPG. GPG is the more popular encryption/decryption tool in Linux. Seahores also provides a plug-in for Nautilus, the file manager used in LLiurex in the lasts years. Sadly Nautilus has been  replaced by Dolphin in Lliurex 21.

So we need to install the following programs in our virtual machine.

In order to do so, you need to follow the teacher instructions

1. Enable the LLiurex Focal repository  using the tool Boton Aplicaciones->Administración de lliurex->Repoman->Repositorios por defecto. Then click on the button apply. This can take some minutes. 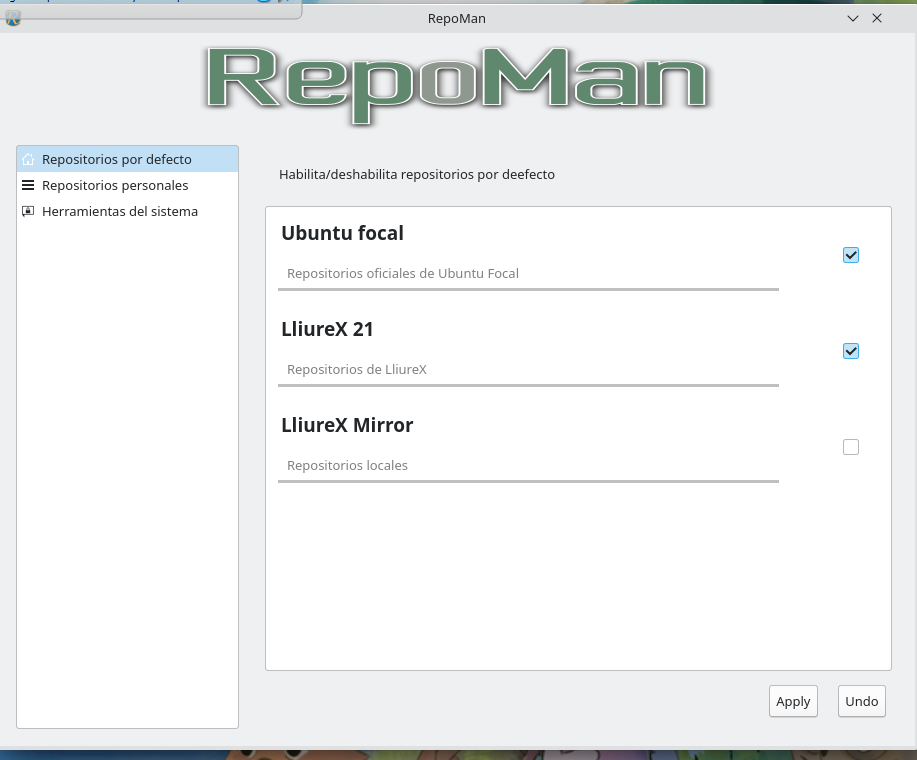 If everything goes according to plan, you will have two new menus:

The first thing to do is to create our first pairs of Keys. This can be done in Seahorse, but takes longer and it is better you know how to work directly with GNU PGP.

Enter your personal information: full name, email (you can make it up) and a comment.

Press 'V' to go ahead. Input a password to protect the private key. Keep in mind that if the private key were not protected by a password, any person logins in your computer might be able to steal your identity. Make sure you remember this password later. Write it down, or use the same password you are using for your user. 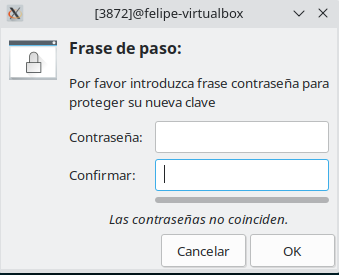 Finally a message tells you the key has been created.

Let's see the created key in Seahorse. In the left panel click in claves gnuPG. Remember, to start Seahorse click on botón aplicaciones→utilidades→passwords and keys 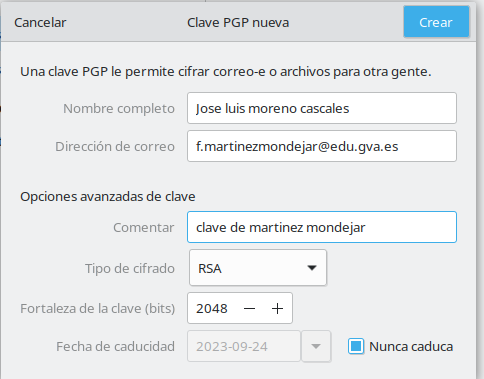 And next… summon all your patience, because it might  be long. A background process will create the keys in some minuts. It might be up to half an hour. But never give up. After a long time the new key will pop up in the Seahorse keys panel

Remember the plan: The student A wants to send an encrypted secret message to B. So B must sent A his/her public key through internet. Then A will encrypt the message with B's public key and will send it to B by email. Only B will be able to decrypt the messages as long as it only can be decrypted using B's secret key, and it never went out his/her computer

This will store you public key in a .pgp file. 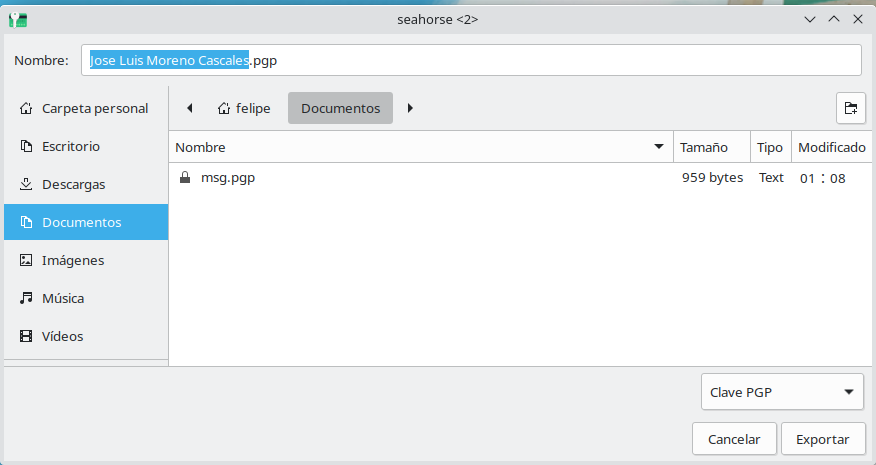 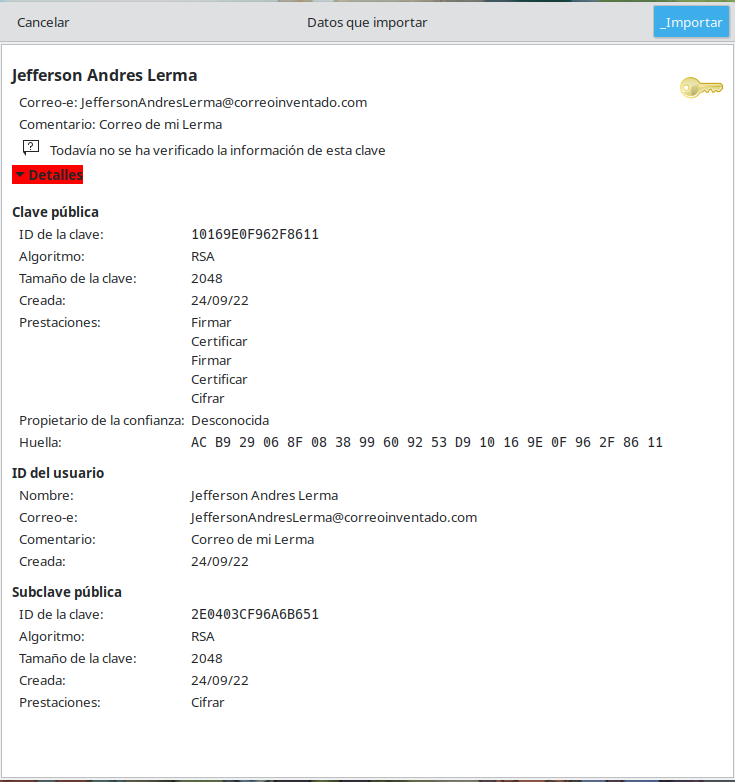 Notice that the imported public key is shown next to a single key icon…..

…. while the private-public pair keys are shown next to a two keys icon. This make sense because the imported key is a single public key while the pair are two keys the public and private

IMPORTANT: THIS LAST PROCESS, IMPORTING THE PUBLIC KEY MIGHT FAIL IN THE CURRENT LLIUREX VERSION. IF IT IS THE CASE, IN ORDER TO IMPORT THE KEY, YOU NEED TO FOLLOW THIS PROCEDURE

1. Log out. You need log out your courrent session in order to update the background seahorse process

If this doesn't work try this other procedure.

1.   In the files browser,  select the folder where you saved the key you want to import

2.  Press the keys Maysculas+F4 in order to open a terminal in that folder

3. In the prompt write gpg --import  the_name_of_key_file   (replace the_name_of_the_key_file, for the name of the private key file

4. Log out. You need log out your courrent session in order to update the background seahorse process

Done, the encrypted file is the one with .gpg extension

Next send the encrypted file to your partner by email.

Your partner in this activity should already have sent you his/her own secret message in an encrypted file. To decrypt it, select it in Nautilus, drop down the contextual menu (right mouse button) and select the menu option Abrir con descifrar fichero. Remember, he/she has encrypted the message using your public key. To decrypt it will be necessary to use your private key, and we had protected it with a password.

And then, it will be possible to open and read your partner's message

Ask your teacher to come by and assess your work

PART 2. EXCHANGE A SECRET MESSAGE WITH YOUR TEACHER

Clilstore This unit in write format