The Legend of St. Paul the Hermit 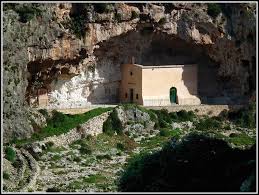 Read some information about the chapel of St. Paul the Hermit in Mosta.

Watch the video in the green button to see how you can get to the chapel.

Answer the questions at the end of the video.

Read about the legend.

A holy man, called Korrado, lived in this cave. He was a hermit because he lived alone and spent most of his time praying. In his opinion the people who came near his cave were living a very bad life. He often told them to change their lifestyle but they only made fun of him. One day they started throwing stones at him. He started running along the valley until he arrived at the seaside. As he stood by the water, he took off his cloak, put it on the water, stepped on it and  he was carried away to Gozo. When they saw him walking on water the people were filled with fear. They started calling for him to return to them promising him they will change their life. But he did not turn back.  In Gozo he went to live next to the church of the Conception in the village of Qala. He died some years later and was buried near the church. Many people used to visit his grave to show their respect. The people of Mosta built a church inside the cave where he used to live. Many people believed that water flowed inside the cave because of the hermit's miraculous powers. The chapel was named after the first St. Paul the Hermit, who lived in Egypt and also spent most of his life in a cave. You can read more about the first St. Paul the Hermit here. Some people believe that the hermit of Wied il-Ghasel was Corrado di Noto of Sicily. He was also a hermit and lived in a cave.

Adapted from: A Hundred Wayside Chapels of Malta and Gozo, Kilin; Heritage books, 2000

Select the Questions green button below and complete the interactive task.

Select the Sequencing green button below and complete the interactive task.